The Columbia River rises in Windermere Lake in southeastern British Columbia, Canada. The Columbia flows north through Kinibasket Lake, then buttonhooks south, past Castlegar, and into northeast Washington state where if forms 150 mile long Franklin D. Roosevelt Lake. Some 90 miles south of the Canada border at Fort Spokane, Roosevelt Lake receives the Spokane River, flowing through the city of Spokane from its source in Lake Coeur d’Alene, Idaho. The Columbia, as Lake Franklin D. Roosevelt, turns westerly at Fort Spokane, twisting and turning until is impounded by the massive Grand Coulee Dam, the largest hydroelectric dam in the US. Lake Roosevelt was created by Grand Coulee Dam in 1941.

The view of Grand Coulee Dam below is from the Visitor Center which is just off State Route 155, below the Dam and near the small community of Coulee Dam.

The Bureau of Reclamation operates the Grand Coulee Dam as part of its Columbia Basin Project in Washington, Idaho, Oregon, Montana, and Wyoming. Initial construction of the dam was completed in 1941. As a response to the Covid-19 pandemic, the BOR has posted the following warning on its website: “The Bureau of Reclamation has temporarily closed public visitation to the Grand Coulee Dam Visitor Center in support of the recommended guidelines from the Centers for Disease Control and Prevention.”

Dams along the Columbia provide hydroelectric power for businesses, industries, and homes from Spokane, on the eastern border, to Astoria, Oregon on the Pacific coast. Although the land that embraces the Grand Coulee Dam is dusty and dry, Columbia River dams also power pumps that irrigate the central plateau of Washington, turning dry land into fertile orchards along the River.

The river continues west from Grand Coulee, passing the Chief Joseph Dam at Bridgeport. Chief Joseph Dam, like the other dams on the river, are temporarily closed to visitors in response to the Covid-19 pandemic. The Dam is the second largest hydroelectric dam in the United States. It is the largest hydropower producing dam operated by the US Army Corps of Engineers. The dam produces enough power to supply the Seattle metro area. Chief Joseph Dam is 40 road miles west and downriver on the Columbia River from Grand Coulee Dam. Named after Chief Joseph of the Wallowa Band of the Nez Perce tribe, the dam does not have a fish ladder and blocks spawning salmon swimming upriver. The original construction of the dam was finished in 1958, and after more generating units were added and the size of the dam increased by three feet in 1979, Chief Joseph produces 2620 MW of hydroelectric power. Late July finds the spillways dry.

State Route 17 is carried across the Columbia River on the Bridgeport Bridge. The small town of Bridgeport is just to the left of the image below, on the south bank of the broad Columbia. Chief Joseph Dam is upriver, to the right of the image. The US Army Corps of Engineers office is in the foreground. Apple orchards drape the hillsides on the far side of the river. Rabbitbrush and sagebrush adorn the near hillsides that are not irrigated as the orchards are.

Beyond Bridgeport, the river turns north for 20 miles, then west, passing the confluence of the Columbia with the Okanogan River that flows south from Osoyoos Lake that straddles the Canada-US border, 75 miles north. The confluence of the two rivers becomes Lake Pateros. Bluffs adorned with rabbit brush, sage brush, and field grass overlook the broad Columbia River, reflecting the deep blue of an azure sky smudged by dirty white clouds. The Columbia flows smoothly south towards Brewster to the right of the image. The confluence of the Okanogan and Columbia Rivers is left of this image of Lake Pateros, impounded by Wells Dam farther south.

On a bluff overlooking the confluence of the Okanogan and Columbia Rivers, a historic marker remembers Fort Okanogan, which was built by Astor’s fur traders in 1811, taken by the British Northwest Company in 1812, then occupied by Hudson’s Bay Company until 1860. The fort was used for trade with fur trappers, Native Americans, settlers, and gold miners. A broadly branching willow, turning brown in November, stands nearby.

Pateros is an apple packing town. It has two motels, a post office, an apple packing plant, a gas station, a cafe/bakery, and a few other small businesses. In 2018, 714 people lived in Pateros which straddles US 97 at the confluence of the Methow and Columbia.

The Methow River meets the mighty Columbia River beneath the two bridges, center in the image below, at Pateros. The truck is on the US 97 bridge across the Methow. The steel girder bridge nearer the camera is a rail bridge that carries the CSCD (Cascade and Columbia Railroad) and the BNSF Railway. The Methow River flows down through the Methow Valley which stretches towards the dark hills on the horizon. Docks of Pateros motels reach into the Columbia on the right.

Despite its size, fewer than 800 people live in the riverside community, Pateros has a fine library. Pateros is nestled below the dusty foothills of the eastern North Cascades.

The small town of Pateros sits at the confluence of the mighty Columbia River, right of image below, and the Methow River that flows down from the high hills and peaks of the North Cascades. The Methow River reflects the pleasant homes of Methow while it is still dark as the rising sun casts dark shadows from gray green sage and rolling folds of the dusty brown hills behind Pateros. Sunrise makes sharp shadows in late July.

Eight miles down the Columbia River from Pateros, Wells Dam impounds the flow to create Lake Pateros. The Wells Dam Rest Area and Information Center is a fine place to eat a picnic and take photos of the Columbia River as it flows between the hills of central Washington.

Wells Dam is about 12 miles north of Chelan, Washington. Looking north from the Wells Dam Rest Area, looking up the Columbia, a visitor sees sagebrush and hills that are still pale green in late May. Wells Hydroelectric Project is the principal power source for the Douglas County, PUD. By June, the hills will be brown and dusty, and the sage will be turning gray green. The North Cascades peek from the horizon, above the river. Recent rains have paused, and the sky is shades of blue and friendly cloud white, reflecting in the Columbia.

The Wells Dam Rest Area boasts a colorful sculpture assembled from used pulleys, wrenches, and pumps. The mighty Columbia River flows from the mountains to the north to be impounded by the Wells Dam, to the right of this image, a hydroelectric dam owned by the Douglas County PUD. Fourteen hydroelectric dams on the Columbia produce thousands of megawatts of electricity for the northwest.

Another sculpture at the rest area is the brightly painted turbine runner. The original turbine runners at Wells Dam were installed when the dam was constructed on the central Columbia River in the 1960s. This 150 ton, orange turbine runner was replaced in the 1980s. The massive structure is at the Wells Dam Rest area overlooking the Columbia River. The hills on the east side of the Columbia, dusted a pale green in May, are on the far side of the river, behind the turbine.

The hills that cradle the mighty Columbia River are dusted green in mid May. The sage brush is still green, and will not become gray or brown for another month or two. The yellow cranes right of center in the image are part of the dam. The Dam is part of the Wells Hydroelectric Project, and provides electricity across central and western Washington, from the cities of Puget Sound to the Reservation of the Colville Confederated Tribes in northeastern Washington.

Below Wells Dam, the Columbia River continues past Chelan, Wenatchee, and other cities and towns, dams and bridges, sagebrush and apple orchards, on its way toward the sea. The next blog in this series about the Columbia River will look at those lower reaches of the River. We’ll also look at the millenia of geological history and widespread upheaval during repeated Ice Age events that created and changed the Columbia River. 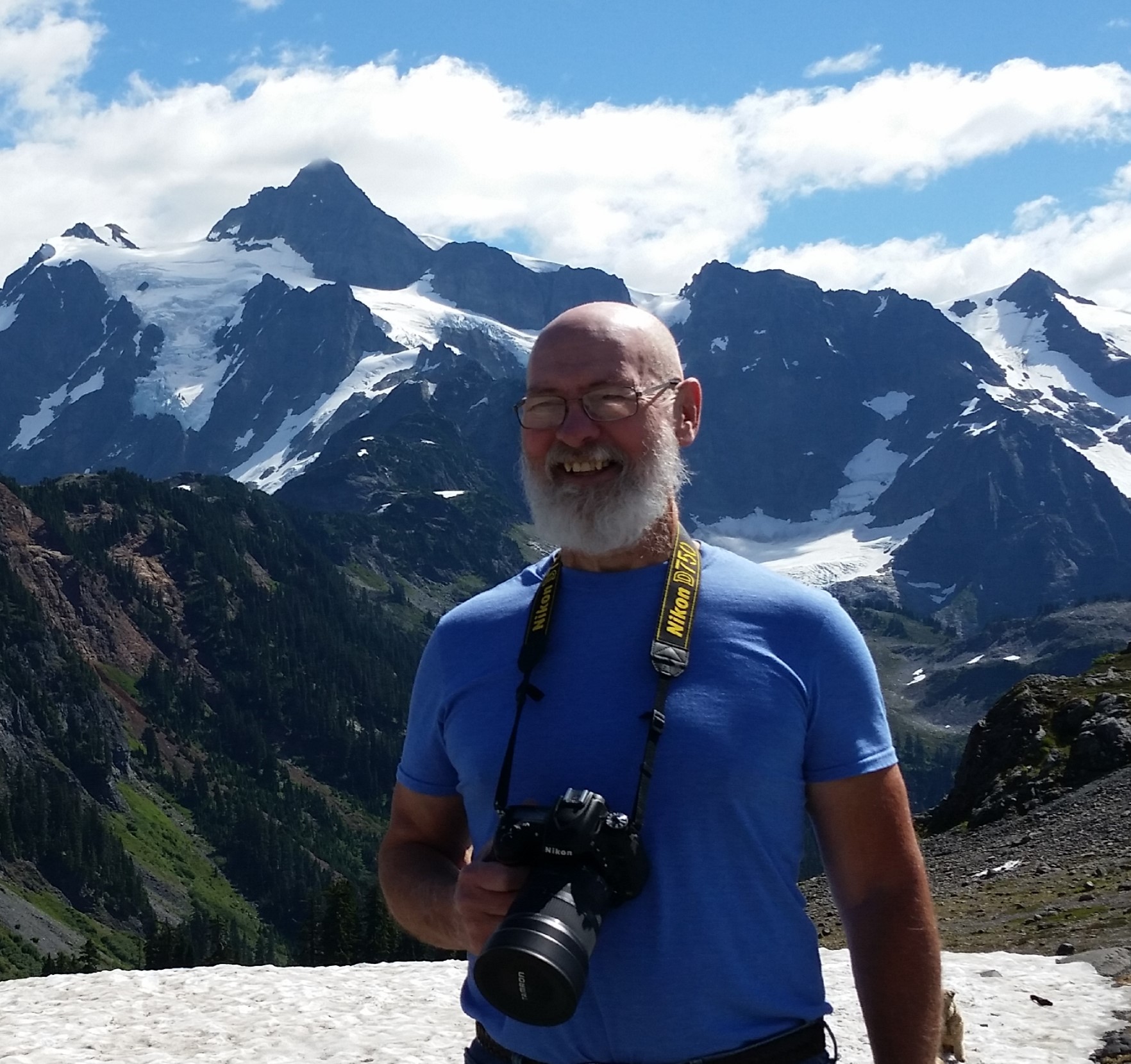